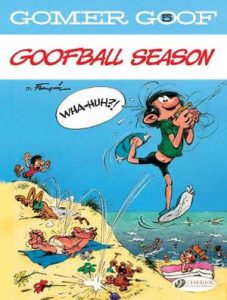 For me, what’s most enjoyable about Gomer Goof is Franquin’s deliciously detailed drawing. The panels are chock-full of manic movement, dramatic expressions and little extras that the page pulses with life. Franquin’s an extraordinary cartoonist and made more interesting in that he writes the tales too. Each page is a self-contained comedy sketch, building to a punchline, typically at Gomer’s expense.

Gomer’s a wonderful comic creation, a contradictory character who embodies extreme laziness with an extraordinary ability to devise and build fantastic machines that suggest the complete opposite of his slothful existence. The fact the inventions rarely work, or the consequences of them are never foreseen, perhaps hint at his lethargic persona.

Understandably, there’s not much of a plot to speak of but plenty of running gags concerning items and scenarios, sometimes building to a crescendo across several pages as the situation gets steadily more absurd. Gomer has his signature quirks and to an extent even a catchphrase in “Wha-huh?!”. Ingenious set-ups include the purchase and mounting of a wonderful cuckoo clock on the wall. Gomer wants to repaint the cuckoo but doesn’t want to disassemble the clock, so every hour he poses on a stool in an attempt to add another dab of paint when the bird appears. There’s also a brilliant invisible man gag well worth the cover price alone.

You might also want to keep an eye on the posters and pictures hanging around the office. A few familiar faces pop up.

If you’ve not discovered Gomer Goof yet then I’d suggest you give him a try. He’s a loveable if hopeless individual forever destined to get it wrong. Funny stuff. For my money he’s a first-rate comic creation.

And if you liked that: You should try Spirou and Fantasio