You are here: Home › The Phoenix

By The Etherington Brothers Publisher: David Fickling Books ISBN: 9781910989784 Don Skelton is back. After kicking the bucket following an unplanned soup inhalation Don finds himself in a surreal afterlife of utter oddness known as Broilerdoom. After seeing off the evil machinations of Spode, the demon ruler of Corpse City, in the previous book, Don’s […]

Continue Reading
By Simon Chadwick on August 15, 2016 in Reviews 0

By Adam Murphy Publisher: David Fickling Books ISBN: 9781910989197 Lost Tales is the latest collection from the pages of the great kids’ comic The Phoenix, and the third collection of work by the brilliant Adam Murphy. His previous two books have concerned his strip Corpse Talk where the reader gets to learn about some extraordinary […]

Continue Reading
By Simon Chadwick on April 7, 2016 in Reviews 0

By Lorenzo Etherington Publisher: David Fickling Books ISBN:  9781910200827 The Phoenix has been a breath of fresh air in British Comics and one of the regular contributors is Lorenzo Etherington, artist on Long Gone Don and creator of the fiendishly entertaining Von Doogan, a weekly puzzle-based strip that collectively forms a greater narrative, but requires […] 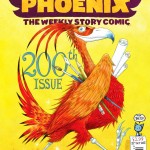 The weekly British children’s comic, The Phoenix, celebrates its 200th issue on October 30, 2015, becoming the first independent weekly comic in the UK to reach such a milestone since 1969. Launched in 2012, and rated ‘the second best comic in the world’ by Time Magazine, The Phoenix has gathered an army of fans across the nation and […]

Continue Reading
By Simon Chadwick on October 25, 2015 in Reviews 0

By Laura Ellen Anderson Publisher: David Fickling Books ISBN: 9781910200513 David Fickling Books continue their series of quality Phoenix Comic collections with the dastardly Evil Emperor Penguin, a behemoth of crime and disorder whose only goal is to take over the world. Unfortunately for him he’s not particularly good at it, and is aided and […]

Continue Reading
By Simon Chadwick on September 13, 2015 in Reviews 0

By Adam Murphy Publisher: David Fickling Books ISBN: 978910200490 Adam Murphy’s second collection of interviews with the famous and noteworthy undead has arrived and it’s just as entertaining as the first one. Collected, and slightly expanded upon, from the strips that appear in The Phoenix, Corpse Talk sees Adam having a head-to-head interview with a […]