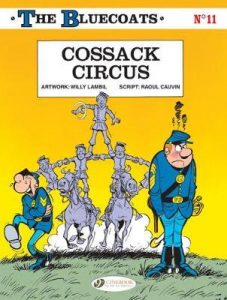 The Bluecoats return with another tale of Chesterfield and Blutch, the 22nd Cavalrymen attempting to survive the American Civil War. On this occasion the cavalry’s numbers are so depleted by deadly charges at the enemy there’s not much of a cavalry left, so Chesterfield and Blutch are appointed as instructors and sent to collect a group of new recruits. Unfortunately, when they arrive at the camp not only are the men not dressed as soldiers, they’re not even aware that that is why they’re there. They’re all recently arrived immigrants looking for work but have somehow been persuaded into the camp. So all Blutch and Chesterfield need to do is convince them to sign up, train them, and lead them into battle for a country that’s not theirs and is busy fighting amongst itself.

The Bluecoats books attempt something you don’t come across in other humour books in that at their core the stories are about the realities of war, the real risk of death or serious injury, and the often unjust consequences two battling sides can bring to everyone in their orbit. In this case it’s about the desperate need for cavalrymen, a need that wouldn’t be required if there wasn’t such a reckless disregard for the lives of those that went before, but it’s also about the willingness to take them from absolutely anywhere just as long as they can be convinced to fight. The most shocking aspect of this, and it’s by no means exclusive to the American Civil War, is that in order to get men to sign up it was often done under false pretences or blatant deception. Once you had their signatures on the sign-up papers those men, and their lives, were yours to do with as you please.

Rather than gloss over this weighty subject we find Blutch and Chesterfield struggling with it, and although they don’t agree on the method, they are both torn by duty and expectations, particularly when it turns out the potential recruits are all gifted riders.

The Bluecoats is often in the shadows of similar books, but it constantly surprises me for its deft scripts handling difficult subjects with humour, and always without sacrificing the gravitas of those situations. They’re worthy of your attention, and for any younger readers who enjoy comics and cartoons.

And if you liked that: See more Bluecoasts books at www.cinebook.com

The Adventures Of John Blake: Mystery Of The Ghost Ship
Mudbite