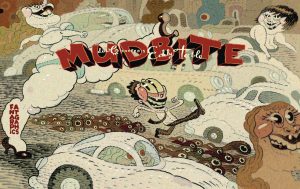 It’s been years and years and years since Canadian cartoonist Dave Cooper produced a new book other than a collection of his paintings (there was a children’s book in 2007 that was quite fun). You may not know the name, but he produced much of the concept design for Futurama and his character Eddy Table was one of the many comic-related knick-knacks dressing the set of the IT Crowd. His books are often a strange combination of wide-eyed cute characters in dark, twisted stories, invariably with sexualised scenarios in futuristic settings. They are, without doubt, not for everyone, and although they’re not vulgar, they’re certainly provocative and bizarre.

Much of his output over the last 15 years has been paintings of ‘pillowy girls’ all done with his unique cartoon aesthetic, and now he’s combined this distinctive painted style with his keen eye for design and layout to create a new book, Mudbite.

Featuring his character Eddy Table, it’s actually two short tales using a flipbook style. Both, inevitably, follow similar, familiar themes to his other work, one involving a naked giantess floating on a river of mud that Eddy ends up riding like a raft, and another where Eddy’s family enter a music shop only for Eddy to stumble down a corridor that leads to a fantastical glade. Both stories are more vignettes than fully-rounded narratives, but it’s the execution that makes them interesting.

Presented in a hardback format this isn’t a cheap book, and because it’s fully painted it must have taken a considerable time to produce, but having looked forward to this for quite some time I can’t help but feel short-changed by the brevity of the whole thing. Still, better this than nothing.

This isn’t a book for everyone’s tastes, and I fully concede that Cooper’s obsession with the female curvy form is more at odds with modern sensibilities than it would have been 15 years ago. That all said, nobody cartoons or paints quite like he does, and there’s much to enjoy and appreciate in his  work. If you don’t know him it’s worth checking him out.

And if you liked that: See if you can get hold of his breakthrough book, Suckle.