You are here: Home › The Adventures Of John Blake: Mystery Of The Ghost Ship
By Simon Chadwick on June 7, 2018 in Reviews 0

By Philip Pullman and Fred Fordham 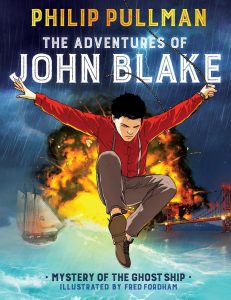 Originally serialised in the excellent weekly comic The Phoenix, Philip Pullman has created a time-travelling high seas adventure that even manages to tip a nod in Ian Fleming’s direction.

There’s a ship, the Mary Alice, crewed by disparate men from various periods across time, and one of the crew, John Blake, holds the key to allowing that ship to slip through the years. Unfortunately, they’re being stalked by an entity that wants to end their journey, putting all their lives at risk. Things get more complicated when the Mary Alice rescues a girl, Serena, who falls from the family yacht in the open ocean. The crew endeavour to reunite her with her parents, but in doing so risk exposing themselves to the threat that hunts them.

Philip Pullman has managed to pull off a fresh take on time-travel tropes, neatly bundling it with historical elements, contemporary references and plenty of action. There’s a palpable air of menace throughout the pages, allowing the story to feel a more grown up than many of The Phoenix’s more serious content, but without starkly setting itself apart from them. John Blake and Serena get into a fair few scrapes, and although their lives are threatened, the way they handle those threats is not with guns and knives but with resourceful thinking and quick wits, keeping the danger very real and immediate.

I thought I’d read the book over two evenings, but was surprised to find I’d consumed the whole thing in one satisfying sitting. Heaps of accolades have been piled upon it already, and it’s all well deserved, largely thanks to Pullman’s characters, pacing and reveals, but also because Fred Fordham’s art suits the tale so well with his crisp, clean art. I don’t really think it matters if you’re a child or an adult, you’re going to enjoying meeting John Blake.

And if you liked that: Lots more Phoenix related books at https://thephoenixcomic.co.uk/shop/