You are here: Home › The Survivors (Quantum Anomalies): Episode 2
By Simon Chadwick on June 2, 2015 in Reviews 1 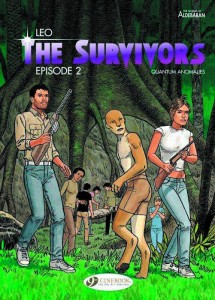 Leo’s new series, set alongside the Aldebaran stories, is firmly set on its own course now. With the Aldebaran tales Kim and the other characters were forever up against unusual unexplored environments and the bizarre alien flora and fauna that was spawned there. In The Survivors, though, it’s not just the native wildlife that’s the issue. Due to a quantum anomaly many vessels from many alien nations have come unstuck near the planet that our crash-landed humans have found themselves on, and so there is the added danger of bumping into intelligent and calculating beings too.

The survivors have split into two groups and by the culmination of the previous volume Marie’s group have encountered a friendly bunch of humanoids that assist in equipping them, and guiding them, towards what passes for civilisation on this planet. Armed and lightly provisioned, they’re now making their way through this odd landscape and it isn’t long before they find evidence of members of the second group, but it’s not looking positive. They soon stumble upon some burly aliens with somewhat primitive technology who have captured two of the group, and then witness the brutal, even casual, murder of one of them. Marie confronts the captors head-on, and armed with her rifle despatches them efficiently and with an apparent disregard for her own safety. They are also able to release another captive, a cat-like humanoid, who sheds light on their predicament.

Having made camp Marie takes Alex in search of water, but they encounter a shocking gravitational tremor that sends them scurrying back. However, when they arrive the camp is clearly years old and their companions long gone, apart from a message scratched into the tree. So they’re now not just stranded in space, but have been shunted out of time.

This is an admirable device to insert into the story as the time shunt is only a handful of years but it’s enough time for the other characters to set down roots and discover more about their situation, allowing the book to further distance its theme from its sister titles and open up a different set of story possibilities.

Amazingly imaginative and inventive throughout, the Aldebaran books are a modern classic, and The Survivors adds a whole new engaging dimension to it. One of my absolute favourites.

And if you liked that: If you’re not up to speed check out Episode 1, available from www.cinebook.com

Troy Trailblazer And The Horde Queen
The Sculptor