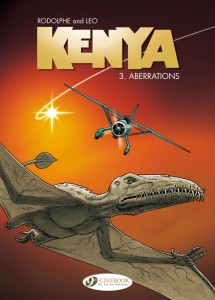 We’re spoilt with two lots of Leo in quick succession, with Survivors Vol 2 and this, the third book in the Kenya series.

Kathy’s returned to Africa as the mysterious sightings of prehistoric creatures continue. Remington and Judith, meanwhile, are guests of the Baron at his incongruous mansion out on the plains where the Baron shows them the odd artefact poking through the wall of his cellar. Following a power cut they realise somebody is at the mansion’s door, but are thrown into shock when they realise it’s Judith’s missing husband, although his behaviour, and the fact he is so immaculately turned out, suggest to them all is not right – a notion confirmed by the frightening moments that follow.

By the time Kathy arrives the three inhabitants are out for the count, but unharmed, and the cellar’s artefact has vanished leaving a cube-shaped void. The Baron knows of another artefact deep in a closed off mine, but when they arrive to investigate this too has disappeared with no logical explanation as to how it could have been removed.

Back in Washington a disbelieving group are discussing the events half a world away only to be shown photographic evidence of what can only be described as flying saucers, and the sightings seem to be on the increase; something Kathy and Remington are about to experience first-hand.

Even though Leo isn’t writing these there are many similarities in the stories structure and sense of mystery – something beyond humanity’s current comprehension. Rudolph does bring a different rhythm to the story, and being set on Earth the differences between the Aldebaran books and these is significant enough to keep it fresh and interesting. It’s just the underlying enigma and humanity seemingly being out of its depth where similarities are drawn. That said, Leo, still gets an opportunity to draw some weird beasties, which is half the fun, and there’s a cracklingly-good one in this book.

Well written, wonderfully drawn, and utterly curious throughout, this is a book worth following.

And if you liked that: Part 4 out soon