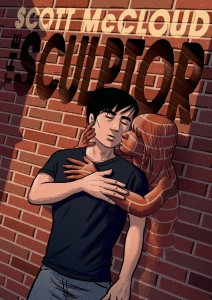 David Smith is a sculptor who briefly tasted success following college and is now struggling with his art and his life. Still a young man, he’s single, lonely, and finding some solace in drink, which is where he’s squarely at when he bumps into his uncle. Except, this is the uncle that, not too long ago, David attended his funeral. David’s mild inebriation appears to help dampen the shock and the dawning realisation that this is Death in his uncle’s guise, and so they settle into conversation about the direction David’s life is taking, with him proclaiming he’d give anything for his art. When pressed he strongly reiterates, and so a proposal is made and a bargain is struck, giving David the ability to sculpt anything with just his bare hands, but only 200 days to do something worthwhile with it. After 200 days David’s time with the living will be done.

Free of hammer and chisel, David can shape the most intricate of designs quickly, efficiently and beautifully, allowing his talent to flourish and grow in directions he’d never considered before. His assumption is that with this gift recognition and acclaim are a certainty, because although he cannot tell anyone about this extraordinary power he can show the results; but nothing is ever that straight-forward. His initial efforts are too overwhelming and he quickly finds himself worse off than before. Following a bold piece of street theatre his life becomes further unsettled until the centre-piece of that drama offers him a lifeline and a chance to focus. He quickly falls in love, but is it fair to become so entangled with another person’s emotions when you’re withholding such secrets, not least that you’ve a fixed number of days to live?

Scott McCloud has created a powerful human drama about two outwardly-determined creative individuals who are much more fragile on the inside then they show. Their personal circumstances pull them together so the inevitable conclusion that’s coming draws you to the edge of your seat as you await the tragic consequence. However, like all good set-ups, what appears inevitable isn’t necessarily so. Beautifully drawn and told, this generously thick tome gives the tale plenty of space to develop emotionally and dramatically, until you’re well and truly ensconced in the day-to-day lives of David and Meg.

David’s been granted an ability that in any other work of comicdom would be deemed a super-power, and yet we’re spared that route entirely as the only night-time patrols he undertakes is to perform Banksy-like street-art. Despite this amazing gift David still struggles with what he wants, proving the adage that you should be careful what you wish for.

Definitely deserves to become on of the genre’s classics, so if you’re looking for something with a little more emotional and intellectual weight this certainly won’t let you down.

And if you liked that: Take a look at This One Summer