You are here: Home › Troy Trailblazer And The Horde Queen
By Simon Chadwick on June 1, 2015 in Reviews 0 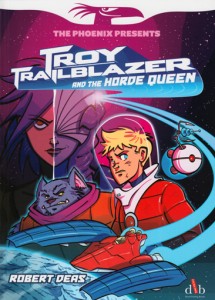 Troy Trailblazer And The Horde Queen is a thumping kids’ sci-fi adventure originally presented within the pages of The Phoenix and now collected into a single volume. If you like a bit of Doctor Who, a smidgen of Star Wars, and perhaps even a hint of Avatar: The Last Airbender, then this should certainly tickle your fancy.

Troy is a teen space adventurer, accompanied by Jess, an ex-bounty hunter; Barrus, a stocky, heavy-set cat-like alien; and blip, an efficient but compact spherical robot. The adventure opens with them ‘stealing’ the Infinity Jewel from a palace whilst being pursued by armed guards, although it’s made quite clear that they’re only stealing something that was itself stolen in the first place. The successful result sees them setting course for warmth and relaxation on the planet Solus, but during hyper-sleep Jess alters course for another, significantly colder, planet, following a strange dream. On arrival they find creepy insect-like alien parasites that latch onto their hosts and control them in a zombie-like state. Unfortunately Jess becomes repeatedly pre-occupied, and ends up abandoning her friends in search of a mysterious calling.

So far, nothing too out of the ordinary as far as sci-fi adventures go, with some witty banter, dangerous situations and nasty aliens. And then it all gets a wee bit darker, and the entire story moves effortlessly into a more mature, more challenging tale, leading to a second half of the book that involves time travel, consequences and some shifting up and down the emotional scale that you rarely see in comics aimed at kids. Not that it’s inappropriate in any way – it just treats the readership with a little more intelligence and invites them along for the ride. And it does it well.

Another great addition to The Phoenix Presents library, it’s perfect for children keen on good stories and ideal for those more reluctant readers looking for a way into books.

And if you liked that: Plenty more quality books available at thephoenixcomic.co.uk

A Weekend dahn in Margate
The Survivors (Quantum Anomalies): Episode 2