You are here: Home › Planet Paradise
By Simon Chadwick on January 7, 2021 in Reviews 0 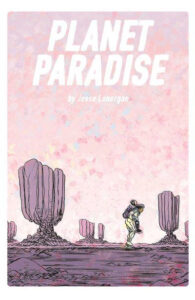 Once upon a time depictions of the future were all shiny spaceships, jet-packs and copious amounts of leisure time. But, oddly, that’s all a bit boring. Instead, the best sci-fi visions depict the worlds of tomorrow as, well, a little bit crap. Things don’t work properly. People are lazy. Expectations are low. And people are just commodities to be exploited. That should make for some miserable narratives, but, conversely, it makes the stories all the more compelling. Because it’s relatable.

In Planet Paradise a group of holidaymakers are put into stasis for a flight to another star system and a luxury planet. Except they fail to get there when the spaceship malfunctions, causing them to crash-land on a far less hospitable world. Eunice, an aforementioned vacationer, survives the impact and is awoken from her slumber. She finds the injured captain of the vessel, but there’s nobody else. Somehow they need to send a distress signal and survive the planet’s perils.

The book is not entirely wordless, but they are few and far between. This manages to add to the atmosphere of despair and hopelessness, elevating the story where a constant monologue could have distracted. The illustration style is both vibrant and loose, mashing together a Flash Gordon future with a functional and tired one. The humour’s dark, and served just how I like it.

If you enjoy Taika Waititi movies and TV shows then this will be a good fit for you.

And if you liked that: Try Headlopper.