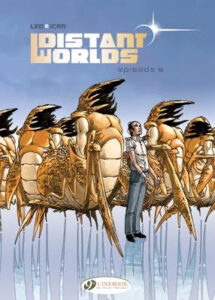 In this final volume of Distant Worlds Paul’s life is about to change once more. Last seen ascending into a beam of light with a host of Stepanerks we now discover the aftermath. And it’s not what you’d expect. Paul has landed himself the task of saving all humans colonising the planet, and has just a month to do it. And the help of Mr Step, too.

But it’s not just change for Paul. As he prepares to travel to the capital many of the various characters he’s interacted with along the way are going through changes too. Despite the calamities and dangers, though, Paul is in possession of a new-found confidence and a little luck. The mammoth task of saving the colony just might be possible.

If I’m honest, this isn’t my favourite Leo series. It has all his story-telling hallmarks but without his distinctive illustration alongside it, which I can’t help but feel leaves it somewhat lacking. That sounds terribly unfair to Icar, but it’s hard to ignore Leo’s body of work. And that’s not to say that Icar has done a bad job – he’s just no Leo.

What this series has been is another fascinating look at the early days of human expansion throughout the galaxy. These type of stories have a newfound relevance as we take our first tentative steps towards an off-world presence. Exploring those possibilities and pitfalls through story-telling is a great way to engage with the subject, and Distant Worlds delivers on this.

My favourite part of Leo’s fictional words are his native fauna designs. I do wonder how much of a hand he had in the design of the Stepanerks. As a species they’re a curious construct, portrayed as indistinctive to one another and with hidden faces. This adds to their mystery, but for the human reader it does make them harder to engage and sympathise with. Fortunately their design is very bold indeed which had gone some way to compensate, but I for one would have liked to seen them more developed. But perhaps that’s a foolish wish. Throughout Leo’s books he’s happy to keep aspects mysterious and unexplained. This reflects the fact that answers seldom come easily, and for the most part that works just fine.

And if you liked that: Then try any of the many other books by Leo