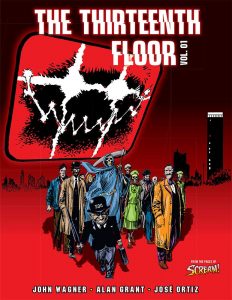 Undoubtedly an exercise in nostalgia, this is a book that ticks all the boxes when it comes to reliving one’s childhood. I was a year or two off of being a teenager when the comic Scream launched. My friend discovered it first and it was only rooting around in his Eagles (I was getting 200AD and Return Of The Jedi comic at the time) that I happened upon a the first couple of issues. But I was hooked. There was one particular short story of a hideous creature lurking on a beach that I found equally horrifying and captivating, and there was The Thirteenth Floor.

The Thirteenth Floor was about a tower block with a futuristic sentient computer called Max. In today’s parlance that’s a sophisticated AI. Max looked out for his tenants, making sure they were healthy, entertained, and never fearful of being alone. Sounds ideal, but the problem is that when the neer-do-wells did turn up, and turn up they most certainly did, Max’s programming demanded he took action. And that meant the criminals and the bullies ended up on his thirteenth floor, a product of his digital mind that confronted the miscreants with their nightmares, and often in a way that darkly reflected their crime.

As a concept there was lots of potential to play with, and Max’s rendering as demonic distorted screen was a terrific bit of design. But an episodic villain of the week was never going to succeed long-term, so a venture into a deeper story with a more involved plot began to take shape.

All these years’s later, with dangerous AI a concept thoroughly explored in science-fiction, there are certainly aspects of Max’s existence that don’t date too well. But it’s a product of its time, not to mention the age group it was aimed at, so even though the villains can be a little pantomime or cliched at times, they were the right fit for the story. After all, all we were really interested in was the horror that would befall them.

Ortiz’s mono artwork is thoroughly brilliant throughout. The tower block and the residents may well be a humdrum thing to have to draw, but once Max got fired up there was no telling what sort of demonic beastie or dreadful scenario would be required to right that wrong. Ortiz wields shadows and darkness masterfully, generating depth, atmosphere and suspense across the panels. It’s not easy doing horror for kids, but Ortiz showed how it was done, not unlike the Dark Judges over in 2000AD at around the same time.

A nice thick volume to boot, this is well worth the trip down memory lane. Just steer clear of the tower block at the end of it.

And if you liked that: Another great example of horror for kids is Cinebook’s Alone. No gore, but plenty of suspense and riveting situations.