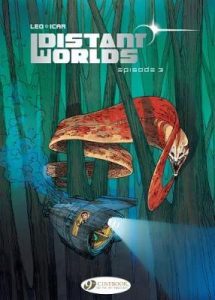 Paul’s been rescued from his dilemma in the pearl beds and is even offered a job as a result, but it’s the search for his father that still occupies his mind. Declining the job he’s now stuck with little money, and to make matters worse a run in with a previous acquaintance sees him getting robbed. It’s only the intervention of Hank the bounty hunter searching for his father that gives him an excuse to move on.

Following a solid lead they arrive at a farm only to discover that Paul’s father has recently died, and the whole trek has been for nothing. Paul returns to the nearest town in the hope of getting a flight home but with money low and a long wait for the flight he needs a job. It’s the first good break he gets, where he has an opportunity to shine, but a shock is waiting around the corner.

There’s a moment in this book, shortly after the arrival on the farm, where Icar’s creature design is both hideous and perfect. There are a few beasties present in this book, although the cover creature doesn’t actually get a look in within the pages. Instead this book involves a lot of wandering about ramshackle towns and the places within. As a result this one feels a little less like an alien world and more like a road trip through the outback or New Mexico. There’s solid plot reasons why this is happening, but for me that’s the least captivating part.

No disrespect to Icar but this would be a richer experience if it was Leo’s pen doing the illustrations as well as the writing, but to Icar’s credit he’s carving his own niche with his own style. I still can’t help but wonder what Leo’s vision of this planet would have been having read so many of his other books.

There’s clearly a greater mystery at play here that we’re about to find out more about as this issue takes the time to set that all up. Quite where they take us next remains to be seen, but judging from the cover of the following book it’s got some Stepanerk action in it.

And if you liked that: Book 4 out soon

The Thirteenth Floor: Vol 01
Vanni: A Family’s Struggle Through The Sri Lankan Conflict