You are here: Home › Alone Vol 10: The Machine For Undying
By Simon Chadwick on September 7, 2019 in Reviews 0 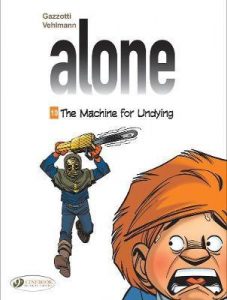 Writing stories with young children is problematic. They don’t necessarily have the world view, the vocabulary or the interest in what’s going on around them to shape the narrative in the manner the writer needs them to, so it’s not uncommon for the child’s behaviour to come across as one of older years, just to get the story moving in the right direction. Alone is always treading that fine line, and with the older children it’s an easier task to pull off, but with Terry, the youngest, it’s certainly trickier.

This volume is pretty much Terry’s book. Along with the Master of Knives, Dagga, they take shelter in what appears to be a warehouse only to stumble upon a toy expo, with rows and rows of booths, thousands of toys and a magnificent Christmas tree as a centrepiece. In his own way Terry is taking the lead, and although he aims to think through the situation like Dodzi would he, almost inevitably, is unable to tear himself away from the toys. But there are helicopters in the skies above and Terry and Dagga know they need to sit tight or be discovered.

Together they find a booth with a model of Dr Frankenstein resurrecting his monster. This gives Terry the idea of building a machine that would return them to the real world. Built from scavenged toys it all has its own internal logic, albeit a child’s one, and is powered by the Christmas spirit, so when he attempts to demonstrate this with Dagga with a gift exchange they’re both surprised to find Camille arrive. Somehow she triggers something in Dagga that reverts him to the destructive individual they first met. Poor Terry is now running for his life.

Other story threads play out here, but this core narrative, about childhood innocence, underpins much of what makes Alone an intriguing read. Gazzotti and Vehimann keep things mysterious but at the same time they allow their characters to interact with the world with all the frustration, wonder, and bafflement needed. The book flirts with horror elements without the blood and gore, meaning it can go from light to dark on the same page, but I think it’s continued faith and understanding in its reader that means it keeps hitting the right beats. A great read for kids.

And if you liked that: Book 11 coming soon

Cartoon Contest on the Theme of Friendship
The Thirteenth Floor: Vol 01