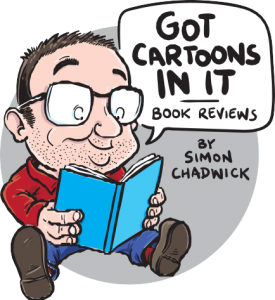 This review was published in Issue 534 of The Jester magazine, September 2019

There’s a lot of strips and cartoonists that I miss. Calvin & Hobbes. The Far Side. Don Martin. However, through the wonders of Facebook all of those regularly turn up on my news feed, posted by fans, and even then I could easily buy or re-read a collection. But if there’s one I’d really like to re-live it would be Robotman, and the strip that spun off from it, Monty, by Jim Meddick. Monty’s still going, but with not a single collection to its name. Robotman has a few collections, but because they go back to 1986 they’re rare and extremely expensive. 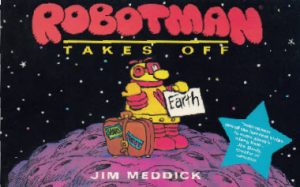 Meddick combines sci-fi tropes, geeky absurdities and general incompetence in his characters to create, in my opinion, a consistently clever and funny strip, and it all started with Robotman Takes Off. Quite why he’s not been able to reprint his back catalogue is beyond my comprehension.

After years of searching for a copy I stumbled upon this one on a table at the back of a hardware store in an out-of- season skiing town in upstate New York while on honeymoon. That’s a very Jim Meddick sentence right there. 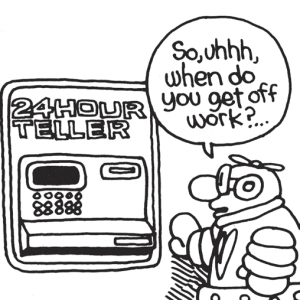 And if you liked that: Monty: Primary Crullers.

That Clip Studio … Mannequins .. How Do they Work then?
Cartoon Contest on the Theme of Friendship