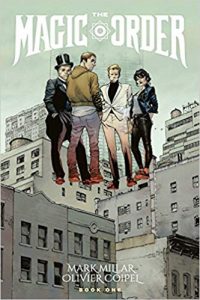 The first thing that strikes you about this book is the sheer abundance of Netflix logos all across it. And with good reason. The digital behemoth has snapped up Mark Millar’s increasingly varied set of stories and set him loose on yet more, so although the comics fraternity has been aware of him for twenty years or more he’s very likely to become much more widely known over the coming years.

Part of Millar’s success is his ability to take well-worn tropes from across comics, fantasy and science fiction and invest them with new life. He’s the guy that modernised the Avengers in the Ultimates, which in turn became the basis for the MCU’s take on it all, so that should give you an idea to his approach. Which brings us to The Magic Order.

There’s a little bit of Harry Potter about it, but not a lot. It owes more to those cosmic and supernatural threats that flourish throughout comics, where a group teams up to beat back something monstrous. By and large, that’s all backstory here, and part of Millar’s cleverness is to understand that you’ve read or seen similar takes on before. He’ll throw a few nods towards those aspects in a ‘you know what I’m talking about’ sort of way and then the reader fills in all the blanks themselves. No lengthy origin stories or heavy exposition needed, so instead you leap straight in with the more interesting stuff, and the inevitable twists Millar then puts on your expectations.

Another thing he does quite well is family dynamics, whether they’re across several generations, or extended groups brought close by association or need, and that’s often where the good drama and anguish lies. And no different here. Somebody is picking off powerful magicians, all members of the Magic Order which consists of a group of specialist magic-types defending our reality. It doesn’t even appear to be too much of a mystery who is doing it, but like all magic tricks the question is how.

The crowning glory of The Magic Order is Olivier Coipel’s artwork. You may have seen it on Thor or Spider-man (amongst much more) and he’s a great fit in bringing the real world and magic together (and not forgetting the ever stupendous colouring of Dave Stewart).

Not one for younger readers, this contains mature themes and grisly deaths.

Do you remember how everyone got excited when The Umbrella Academy debuted on Netflix? I suspect this will be a little like that. Read it first, and enjoy.

And if you liked that: Get a copy of Mark Millar and Frank Quietly’s Jupiter’s Circle. Very good indeed.

Trent Vol 4: The Valley Of Fear
Story Without A Hero