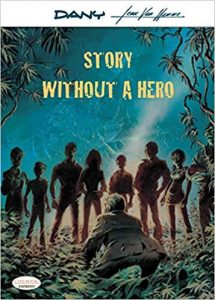 Always welcome, as far as I’m concerned, is another book written by Jean Van Hamme. This new Cinebook offering falls under their Expresso collection for self-contained or two-part stories. The tale itself involves a plane crash in a South American jungle (no Marsupilamis, though, I’m afraid) with just a handful of survivors. The inevitable consequences of such a disaster are how to feed and water the group while waiting for rescue, if indeed rescue is going to come, so what Van Hamme sets out to explore are the various conflicts, egos and personal dramas as the group rub up against one another.

There’s a lot of Van Hamme books from the past few decades, and although this first saw print as a book on the continent in 2003 I’m guessing it appeared in a comic or magazine much before that. Dany’s illustrations suggest 1970s/80s and certainly there are no mentions of mobile phones or modern disaster contingencies mentioned within the pages, but that’s not a problem in the slightest. Like with any period tale you want the characters, props and scenery to fit the timeframe, which it all indeed does. This is rather true of some of the characters attitude to one another, which although might be outdated to modern sensibilities, would be equally jarring if they were written with a contemporary style. After all, when one character orders the put-upon air stewardess to find him a bag and put three days worth of food in it you’re very quickly projecting where you’d like him to end up narratively.

Although the tale is called Story Without A Hero, that doesn’t mean to say it doesn’t have one. I’ve no doubt that ensemble pieces were not a common thing when this was written, but nowadays we’re very much exposed to them, and ensemble pieces show that we all have our doubts, fears and moments of heroism. Those acts may be small, or have more impact but for a brief period, but nonetheless they are acts of bravery and of note. So, oddly, this story may have been an oddity when it was first created, or an experiment with the medium, but now it fits in with our current episodic consumerism of stories just perfectly.

Although this is self-contained, there is a second book, so enjoy this one as a one-off, or better yet, get both.

The Magic Order: Book One
Ye