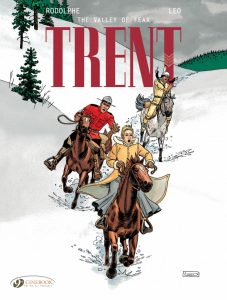 Somewhere up in the frozen Canadian north a railway construction camp is trying to make its way through some uneven terrain, including blasting a tunnel through a mountain. Dangerous work at the best of times, but the work crew are spooked by a string of bad luck that’s included individuals losing their lives. So the arrival of a new Chief Engineer, keen to make a name for himself, seems to be just what the camp needs to turn things around, but no sooner has he arrived that further problems afflict the operation.

By the time we catch up with Trent he’s in the city and being called into the office of his superior to assist with a possible missing person case. The Chief Engineer hasn’t been heard from in weeks and his wife is worried, but the biggest shock is that the woman in distress is the one Trent has been pining for since the first book: Agnes.

Not one to shrug duty, Trent accompanies her north and after many an awkward exchange they arrive at the camp in the company of Mokashi, Trent’s Native American friend. The camp appears to be deserted apart from a handful of bodies and it’s clear something isn’t quite right. Could this be an angry spirit?

Over the last few books Trent has presented himself as a dependable, honourable person, but he’s been clearly in anguish over his lost love, Agnes. To have his worst fears confirmed, that she’s moved on and married, still doesn’t prevent him from attempting to do the right thing, and the situation is handled well by both writer and artist. Capturing the subtler details of human facial expression is an art, and Leo does a terrific job here, not least when George Petterson is alone in his cabin with something lurking outside. All credit to Marie-Paule Alluard for colouring that excellent page too.

I’ll leave the conclusion for you to discover, but for me it brought back fond memories of The Marquis Of Anaon, one of the best series Cinebook has put out to date.

Trent is a thoughtful undertaking that delivers a satisfying tale again and again, largely because the creators are willing to delve a little deeper into what motivates us and makes us tick.

And if you liked that: Try The Marquis Of Anaon from Cinebook.

Peterloo: Witnesses To A Massacre
The Magic Order: Book One