You are here: Home › Reviews › Peterloo: Witnesses To A Massacre
By Simon Chadwick on April 29, 2019 in Reviews 0 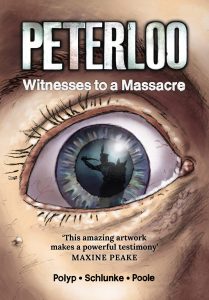 Cartoons and comics are a powerful way of commenting on news and current affairs through satire and wry observation. Equally, they’re also very effective at conveying historical events. As a teenager I picked up the manga Barefoot Gen, a story about a child’s life in the run up to, and aftermath, of the bombing at Hiroshima. The utterly relatable day-to-day life of the protaganist heavilly underscores the human toll of the tragedy.

Peterloo: Witnesses To A Massacre manages a similar outcome by using eyewitness accounts and contemporary documents. These include letters, coroner reports and newspaper reports to narrate the unfolding events of 1819.

The use of this text is cleverly juxtaposed with the artwork, highlighting the hypocricy, lies and cowardice that turned a peaceful demonstration for parlimentary representation into a brutal slaughter of unarmed innocents.

Perhaps most shocking is the soldiers’ attitude to the gathering. Many spoke afterwards of it like a military battle where they’d valiantly seen off the enemy as if they were on equal terms, rather than a gathering that included women, children and the elderly.

Because the book handles its subject matter in this way the perpetrators of the massacre, and the attempted cover-up, are damned with their own words and those that witnessed it.

Despite the bleakness of the subject matter there is courage and determination on show. Amongst all the appalling brutality and senseless barbarism, and for all the bloody horror, it should be remembered that this was an event nobody wanted repeated. Because it happened British democracy was destined to change.

If graphic novels and comics are not  normally your thing but you enjoy history then I’d urge you to give this book a try. It’s brilliant balance of overlaying real voices on the artwork brings as close as we can get to the date 200 years ago.

And if you liked that: Take a look at Barefoot Gen too. A unique window into a very different Japan that catalogues the dropping of the bomb and the immediate after-effects.