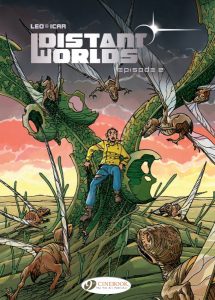 Opening with the party of travellers moving further across the colonised planet Altair-3, some of the group are attempting to understand the previous inhabitants of this world while Paul still seeks word of his father. The alien Stepanerk, known as Mr Step, continues to prove more than useful as it guides them around dangers or simply confronts them head on to ease their passage. But not all dangers are so obvious, so when a lone motorcyclist arrives at their camp with news of Paul’s father Paul must make a difficult decision to follow him to the pearl fields. Feeling increasingly isolated and without even Mr Step now to rely upon, Paul is very much out of his depth.

As you might expect with a book written by Leo, there are shades of Aldebaran aplenty here. Humans colonising a new world, frontier threats and challenges, and alien biology that constantly butts heads with the human infiltration. There are plenty of weird and wonderful creatures depicted throughout the pages and I couldn’t help but wonder time and time again how Leo would have drawn them had he been holding the pen. Many of Icar’s creations seem to have a terrestrial animal at their core, where Leo’s always had a quirky other-worldly oddness to them. Either way, it doesn’t distract from the pacing or general narrative, it’s just interesting to wonder.

This isn’t a science-fiction tale about spaceships and guns, but a human story about family and duty that just happens to be set on a distant planet. The thrust of the tale is Paul attempting to do the right thing, and it’s just that he’s trying to do this against an unconventional background. The challenges he faces and the paths he must walk down are all the more intriguing because of the setting he’s within. It’s a series with a lot of potential.

And if you liked that: Any of the Aldebaran series, also from Cinebook, will slake your thirst