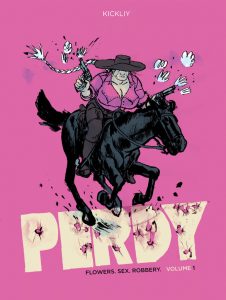 Well, here’s a fresh spin on the western genre. A hard-hitting, hard-drinking, foul-mouthed outlaw, and she’s a woman. Perdy lets nothing stand in her way. Released from prison after a lengthy stay she wants to recover some hidden loot and get back to the way things were., which is essentially drinking, robbery and sex, but the world has moved on while she’s been inside and it’s not going to be straight-forward.

And there’s another wrinkle. Her child that was unwittingly used in her deceptions and robberies is now a young woman and it’s fair to say that she wants nothing to do with her foul and unpredictable mother. Unfortunately Perdy doesn’t see it that way.

Although published by Image it’s presented in the European hardback album style. Kickliy’s loose art style sits perfectly with this rough and ready tale of a woman attempting to recapture the self-indulgent, selfish lifestyle she was so at home within. Mixing humour, violence, sex and a mixed bag of crimes it’s an entertaining two-hander between a mother and daughter at odds with one another out west.

A book for older readers, without a doubt, and another fine example of the versatility of the medium.

And if you liked that: It’s to be continued, so look out for the next part.