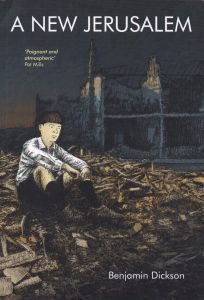 A New Jerusalem is a story of new beginnings at the end of WW2 where an eleven-year-old boy awaits the return of his father. They live in Bristol, heavily bombed during the war, where rationing still bites and children play amongst the bombed-out detritus of other people’s homes. Ralph’s not seen his dad for years and can barely remember him, but in his mind he’s built him up to be a heroic force that bravely took on the enemy, killing soldiers with every fight. But the man that comes home is a far cry from the battling hero of Ralph’s imagination. The brutality of war has broken him. He doesn’t want to talk about it, cannot entertain Ralph’s questions, and violently lashes out at his wife and child when the pressure gets too much.

This isn’t the homecoming Ralph expected and so he’s forced to deal with it, and try to understand it, as an eleven-year-old with little or no support or context. His father’s return has sent a ripple through the local community, not least because he’s returned from the war before other menfolk and so speculation adds another layer of pressure and confusion, and puts a serious strain on his relationship with his best friend. For Ralph, the promise that everything would be alright once his father returned home has been an empty one.

Told at a thoughtful, well-measured pace which gives the characters the opportunity to think and to react, A New Jerusalem swiftly draws you in to 1945 and all the hope that pervaded the end of the war, there to justify the struggle and sacrifice of the past few long years. Dickson’s portrayal of Ralph’s father as a hollow shell, withdrawn and brutalised by what he’s seen and done, should elicit sympathy but the reader is spared no quarter in the rage he inflicts on his wife and child, skewing your perspective and highlighting the unjust nature of their circumstances.

Dickson also manages to evoke the sense of place and community of a battered Bristol and the people who live there, all dealing with their own struggles brought about by the war, and all looking to defend their bit of pride and their good standing in this most difficult of times. But the focus of the book is the family dynamic between Ralph, his mother and his father. It unfolds in a heart-breaking and compelling manner, sweeping you along with a hope of a just and righteous resolution. But war doesn’t work that way.

A New Jerusalem is an excellent book tackling a difficult subject, but one that it manages to do well through its considered approach and thoughtful characters. Most definitely a book you’ll read from cover to cover in one sitting, compelling you on to the very last page.

And if you liked that: Check out Ethel And Ernest by Raymond Briggs.