You are here: Home › Marsupilami Vol 2: Bamboo Baby Blues
By Simon Chadwick on January 31, 2018 in Reviews 0 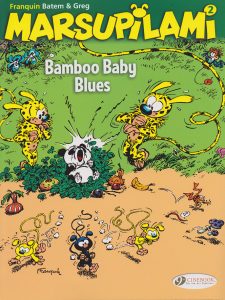 The Marsupilami, the creation of cartooning genius Franquin during his time on the splendid Spirou and Fantasio, now has his own series, and long overdue it is too. Although this new series is not created by Franquin himself, he has overseen it, and huge credit to Batem for complementing Franquin’s style so well, capturing the frantic dynamism and tomfoolery that makes the character, and the stories, so energetic and captivating.

Set in the South American country of Palombia, the Marsupilami is a revered but mysterious creature little known in the outside world. To date, in the English translations of Spirou and Fantasio, the Marsupilami has been one of a kind, but in this series, set within his own habitat, we also get to meet his family, consisting of three children and their strangely glamorous mother.

In this particular tale the plot involves the transport of a baby panda, being escorted from the Palombian capital’s city zoo by two Chinese nationals laden with a large expenses account. Seeking to take advantage of this, an unscrupulous tour operator books them onto the country’s most despicable and unairworthy plane, piloted by a dodgy German, which naturally comes a cropper early in the flight and plummets into the jungle canopy below. Palombia was, we’re told, once a rich source of fresh bamboo, but this has almost entirely been obliterated, so when the Marsupilami and family stumble upon the stranded creature they swiftly work out this is what they need to secure to ensure the cub’s survival. But it’s not just the panda that has survived the crash, so soon the German pilot and a deceitful chief of a local tribe are looking to make the most of the situation.

Like many similar books, Asterix jumps straight to mind, the creators have a significant amount of fun poking fun at national stereotypes, and I suspect some may find the depictions of the Chinese and native tribe as problematic, but I’d argue that it’s never jingoistic – everyone is exploited for some comic potential.

With the recent Asterix volume being something of a disappointment it’s rather pleasing to still come across a new book that embodies the humour and illustrative zest the medium deserves. A lot of fun, from cover to cover, this is a book that all ages can enjoy.

And if you liked that: You can pick up the first book in the series, and get your Spirou and Fantasio fix, over at www.cinebook.com

The Shaolin Cowboy: Who’ll Stop The Reign?
Ed McLachlan On The Edge