You are here: Home › Reviews › The Man From The Great North
By Simon Chadwick on February 14, 2018 in Reviews 1 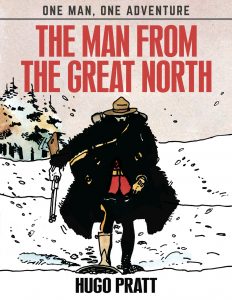 If you’ve ever picked up a Corto Maltese story you’ll be familiar with Hugo Pratt’s relaxed and loose storytelling, both in terms of the story and the artwork. His characters are often scallywags, scoundrels or down-right psychopaths with loose morals, base impulses or hidden agendas to the point that you’re never really sure who is on the side of right, or quite where the story will take you. In this tale we meet Jesuit Joe, set in Canada’s frozen lands shortly after the turn of the twentieth century. Joe’s a man of mixed race, part French-Canadian and part Mohawk, and like Corto Maltese his intentions appear to be largely self-serving, although unlike Corto Joe is, quite possibly, a little disturbed. He has no problem with taking lives, withholding information or deceit, and yet there’s a strange logic and abstract ethics to his actions.

Early on in the story he discovers a cabin with a Canadian Mounties’ uniform hanging inside, which he obtusely decides to wear and which almost immediately launches him down a path of confrontation, misunderstanding and death. Although he looks like a member of the mounted police, he certainly doesn’t behave like one, although this isn’t always apparent to those he encounters.

This is the first time the story has been reproduced in English, and it’s been expanded in places with some of Pratt’s storyboards for a live-action movie version of the tale, as well as a partial second story that picks up where the original story ends. Frustratingly this is all the Jesuit Joe you’ll ever get to read, at least from the pen of Hugo Pratt, but its visceral, brutal nature that steadily resolves itself into something both fascinating and compelling is well worth your time.

With Jesuit Joe Pratt creates a different type of character, neither villain nor hero, but a man driven by compulsion and an inner-logic that despite his actions and obscure morals you can’t help but be intrigued by. A welcome edition to any bookshelf.

And if you liked that: Check out the gorgeous English language reprints of Corto Maltese adventures from EuroComics IDW

Ed McLachlan On The Edge
Trent Vol 1: The Dead Man