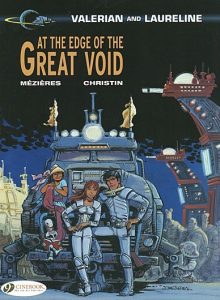 As Valerian and Laureline attempt to carve a living on the edge of the Great Void, we must prepare ourselves for a similar experience as this Mézières and Christin tale sets up the final story arc for the few volumes that remain of their run. To prepare us for that we have to first accompany Valerian and Laureline where they’ve set themselves up as traders while seeking information, and a possible destination, of missing Earth. We’re also introduced to a new character Ky-Gai, who slots in perfectly to the small ensemble cast.

Valerian and Laureline are keeping a low profile so not to draw attention to themselves, stowing their distinctive spaceship and taking on a trading vehicle where they can park up, barter and sell incognito, gathering pieces of information as they travel around the rim of the Great Void. Unfortunately, there are still those who wish them ill will, and it soon becomes clear Valerian and Laureline’s profile isn’t as low as they’d hoped.

Creatures, technology, alien cultures and cosmic destinations are a rich playground for Mézières and Christin’s imaginations, and the true test of such an opportunity is to tread new paths and explore new possibilities, something this series demonstrates time and time again, and not least here with creatures such as the Spiglic and the knife-tongued Klamip. But it’s the entire premise of this current storyline that really flexes the potential of the series and has us buckled in for the journey.

Quite how everything gets resolved, if indeed it does get resolved, is a tale soon to be told and it’s one I look forward to, expertly set up here by two masters of the medium.

And if you liked that: See plenty more Valerian and Laureline at cinebook.com

Tamsin And The Dark
The Shaolin Cowboy: Who’ll Stop The Reign?