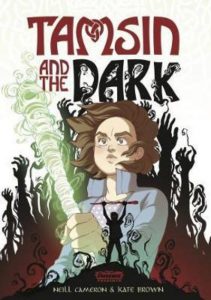 Tamsin returns for a second magical tale set against the folklore and history of Cornwall, and this time it’s not the ocean the holds the danger, but the dark.

Tamsin is becoming accustomed to her status as the Last Pellar, a protector of humanity against mystical forces and beings, although she’s been very much thrown in over her head. And it’s not something she’s managed to keep a complete secret either. The key to her magic appears to be her staff, giving her the gift of flight and enabling her to channel her wishes and commands, but now something else has its eyes on it putting Tamsin and those close to her at risk.

On a class trip to a disused tin mine Tamsin gets a taste of the danger that lies ahead, but it’s only when her brother later falls down the shaft into the blackness below that she realises there’s more going on beneath the ground than she could ever have imagined.

Neatly folding in ancient folklore with the angst and general troubles of growing up as a younger sister, Tamsin is written as a brave and daring hero with her heart set on doing the right thing, regardless of the level and scale of the danger she faces. In any other tale she’d be the annoying little sister of the heroic older brother, but Cameron and Brown deftly turn that trope on its head and let the fun and adventure play out.

Originally appearing in The Phoenix comic, this collects the entire tale into one seamless volume. With it’s mix of mythology and the supernatural attempting to regain a hold in our modern world we get to experience the clashes and conundrums through the eyes of a girl who is still getting to grips with who she is, let alone magic and giants.

There’s an air of menace and peril, but one trumped by the bravery and courage of its lead character, so sure to be a definite winner with kids (and parents) looking for something a little more out of the ordinary.

And if you liked that: Plenty more www.the phoenixcomic.co.uk