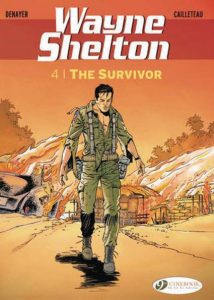 The Wayne Shelton series has had time to bed down so if you’ve been following it you’ll understand the slightly different take on the adventurer genre. Whereas many such series concentrate on younger men in their prime, Wayne Shelton looks at what those men become, so perhaps lacking youth and physical vigour, but with far more experience and reliant upon their cunning and carefully laid plans. It makes for a different tone entirely, often with echoes of a seventies’ caper movie, which adds to its charm.

The creative team underscore this by giving us a glimpse of Shelton’s period in Vietnam as a Lieutenant, leading a bunch of difficult soldiers on a dangerous mission with a sergeant who has been imposed on him. The mission ends in a bloody failure, with Shelton left for dead at the hands of the sergeant, Hooker. After a long recovery Shelton seeks out Hooker, missing him by moments, and that appears to be the end of the story.

That is, until we catch up with Shelton in the present day and a rather dramatic scenario where he’s presented with the possibility of finding Hooker, although the message appears to originate from someone claiming to be Shelton’s son. The odd part is Shelton has never had children. However, the temptation for settling the score is too great, so with curiosity burning Shelton takes his first step towards vengeance.

The nature of just who Shelton’s son may be is done with some poignancy with a clever little twist, which further cements Shelton has a good man occasionally having to do bad or difficult things. My the final page it’s clearly not the end of the story, but there’s a hardening of Shelton’s resolve and surely a reckoning is coming in the next book.

Denayer & Cailleteau have created a cerebral action hero, thinking events through and laying contingency plans, rather than going off half-cocked. He has a swagger and confidence that in a younger character would be arrogance, but in Shelton is the wisdom of the wordly-wise. You can’t help but like him for it.

And if you liked that: Volume 5 is coming soon.