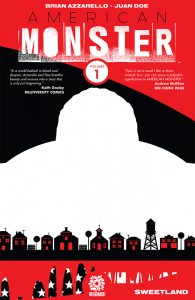 Brian Azzarello, creator of the sublime 100 Bullets, returns to guns and grotesques with American Monster, a story of small town America with delinquents, rednecks, a gun-shifting reverend, and cops looking to a turn a blind eye for a quiet life, all rubbing together in a barely equitable fashion. It takes the arrival of a hideously scarred giant of a man to tip the scales into chaos, and although we discover the nature of his grudge by the time the book is over it’s not completely apparent what outcome he’s seeking.

In typical Azzarello fashion there’s plenty of posturing and attitude on display, with dialogue that sits so well that you can hear their voices in your head. He has a gift for laying down the slang and colloquialisms, regardless of gender, age, race or background, that strike just the right note, creating a modern comic noir.

The lead character, presumably the American Monster of the title judging from his scarred body (although it could be attributed to much of the town judging from their respective social graces, disregard for human life and various peccadillos) is a striking creation, as brutal in his look as he is in deed, and although we find out the nature of his creation there’s still much mystery about him and his intents. Juan Doe manages to make him look fearsome, and it’ll be interesting to see, as the series progresses, where they take him.

Artistically I don’t think the book is as striking or visually effective as 100 Bullets, which isn’t to say it’s not any good, just that Risso set such a high bar on that series that any comparison is likely to come out wanting. All told, I think the groundwork has been laid here for a potentially gripping series, so here’s hoping it lives up to that promise.

And if you liked that: If you’ve not already done so, you should be checking out 100 Bullets