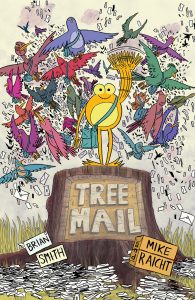 Here’s a quirky one. Rudy is a frog living on Popomoko Island. The frogs all join the Croaker Battalion, but Rudy has always been fascinated by the Air Delivery Corps, deliverers of envelopes and parcels to the island’s residents. The fact the Flight Corps are entirely made up of birds doesn’t factor at all in Rudy’s determination to become one of their number, and so begins an uplifting and optimistic tale of triumph over adversity as Rudy leaps from one challenge to another.

Scorned by the delivery birds, Rudy is given the harshest of errands and the coldest of shoulders, but he’s living the dream and he’s doing it by the book, so he barely notices the aggravation and thrives off of a job well done. Whether this is delivering shoes to a Bigfoot or taking on a dangerous delivery to a neighbouring island in the company of a flightless bat, it’s the thrill of doing what he believes in that carries him through, often utterly oblivious to the obstacles in his way.

There are some great full pages depicting Rudy’s movement through the scene, delivering a storyboard of dialogue and nuance in just one panel. You won’t be surprised to learn from the cartoon comedy that Brian Smith’s worked on SpongeBob Comics, such are the comedic beats and comic timing. So plenty of amazing daftness and buckets of cheerful optimism, and who can’t do without a bit of that right now. All in all, a wonderfully refreshing book.

And if you liked that: Try Headlopper