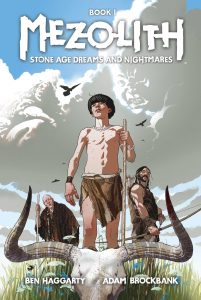 Sorry to say that I missed the original David Fickling Books printing of this one, but fortunately spotted this American printing available from Page 45 in Nottingham. It’s the story of a boyhood from 10,000 years ago, set amongst a small tribe in Ancient Britain. The boy, Poika, is teetering before manhood, but youthful exuberance is no match for experience and patience, and so his innocent foolhardiness almost end his life in the opening pages. The tribe rally round, but it is the knowledge of an estranged medicine woman that ultimately gives Poika a second chance.

The creators have chosen to set their tale in an early Britain of understandable hardship but at a time of humanity’s flowering where people were mastering tools, wildlife and the landscape in a manner not seen before, but for any people making sense of the natural world about them there is much they can’t hope to explain, so it births myths and legends to explain things they cannot begin to fathom. What Haggerty and Brockbank have done is treated those early beliefs as the tribe’s reality, so the stories segue into magic and horror, but without compromising the integrity or flow of the tale.

But the crowning glory of the book is Adam Brockbank’s art. His background is as conceptual and storyboard artist for the movies, including Star Wars – Rogue One and all eight Harry Potter films, so he understands visual storytelling, dramatic tension and scene setting. Haggerty’s scripts would have been remarkable in themselves, but in Brockbank’s hands they give life to a fascinating yet distant part of our ancestry. The result is an incredibly beautiful book that impresses from cover to cover.

And if you liked that: A follow up book is on its way. Look out for it!

NOT the RA Summer Exhibition
Valerian & Laureline Vol 11: The Ghosts Of Inverloch