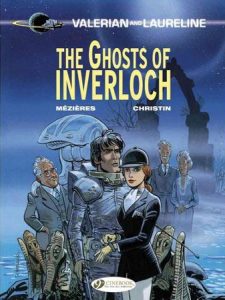 Laureline and Valerian are once again separated in their roles as spatio-temporal agents, working across time and space on the orders of the future Terran Galaxity. But all’s not well. Laureline is in Scotland at a roughly contemporary time to our own, enjoying the hospitality at Inverloch Castle while she awaits orders, while Valerian is undertaking a somewhat wet extraction mission in another star system. Plagued by nightmares, and with Galaxity cut off from him, he’s not particularly content with what he’s been asked to do, nor the working in enforced silence.

And the trouble stretches further, with the alien information traders known as the Shingouz working on behalf of Earth on one planet, and the overseer of the Spatio-Temporal Service wandering a deserted Galaxity, there is a steady drip-drip of information that someone or something is infiltrating Earth and altering humanity’s destiny amongst the stars. Hidden in human form, whoever they are they are successfully eroding at humankind’s achievements and defences, so by the time Valerian arrives at Inverloch Castle the scale of the worry can be revealed and what might be Valerian’s and Laureline’s most important mission laid out.

Don’t expect a resolution within these pages. Essentially this is a lengthy set-up for what follows in volume 12, but it’s by no means a wasted read and gives us a proper sense of scale to the seriousness of the matter, not to mention an opportunity for us to get to know a few of the supporting characters a little better too. Mézières and Christin offer a unique angle on science-fiction storytelling and if you’ve not discovered the series before then now’s the time to do so as Valerian and Laureline are set for their big screen debut next year courtesy of Luc Besson. So do yourself a favour and get immersed.

And if you liked that: The concluding part will be out soon