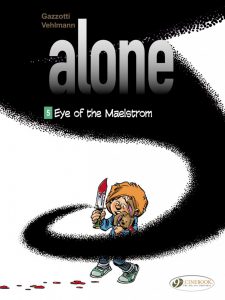 Alone, to date, has been a great series for kids that transcends age barriers as we follow a group of children trying to survive in an almost empty world. Although we’ve met a few other groups of children in a similar situation, there are no adults, so survival is often one of difficult discoveries and tempering childish desires. Now in a larger group the children are living within a small refuge of calm in the city, protected from marauding animals and other groups, but the biggest danger is emerging from within their own ranks.

The first shock comes when one of the lead characters is found, without preamble, at the foot of building having fallen to their death. It’s completely unexpected and marks a turning point for the direction of the story. Under the leadership of Leila a small party head off to discover what lies beyond the red cairns (see previous volume) that the children now know mark the boundary of a large circle across the city. Leila opts to leave the archers Selena and Alexander behind, and possibly with good reason, but they clearly have their own agenda and are making their move.

For our small group, though, as they advance further into the circle things become increasingly odd. Added to their problems is that their youngest member, Terry, has opted to follow them, and now Selena and Alexander are in pursuit and they don’t have his best welfare in mind. But the real eye opener is what they find at the centre of the circle.

Five volumes in, I can genuinely say I wasn’t expecting this. I was well aware that Gazzotti and Vehlmann needed to offer an explanation somewhere for the world in which the children inhabit, but I didn’t think we’d be treading this path, but kudos to them for doing so. Clearly the big reveal of this issue changes the direction of the books but only in the sense that it offers a new mystery and story arc for the reader to get their teeth into. Alone isn’t afraid to challenge its readers, and despite its child-friendly cartoon depictions of the world it isn’t afraid to show a little blood and peril now and again too. It’s not gory or sensational, but does underscore the danger of children fending for themselves in a world devoid of adults without sensationalising it.

Alone is successfully threading a path where few stories aimed at this age group dare go, and it’s able to because there are consequences to actions. Quite how this new twist will change things remains to be seen, but I think the creators have earned our trust. I think it’s also worth mentioning that I often review kids books that are aimed at kids but adults can also enjoy, but Alone feels like it’s in a category of its own – a tale for all ages that just happens to focus on a group of young children. If you’ve not yet tried it then I’d encourage you to do so.

And if you liked that: Book 6 on its way soon

Bunny vs Monkey: Book 3
NOT the RA Summer Exhibition