You are here: Home › Age Of Reptiles: Ancient Egyptians
By Simon Chadwick on March 17, 2016 in Reviews 0 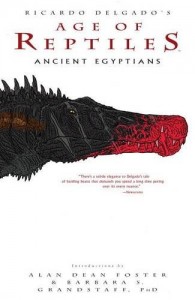 Age Of Reptiles is an occasional comic series telling dinosaur tales about survival in a harsh environment amongst the apex creatures of the period. Each series covers a handful of issues, before being collected into books such as this one, and reads like a wildlife documentary with the barest of anthropomorphic suggestions to behaviour and posture to get across emotional responses. It’s crowning triumph is Ricardo Delgado’s rich and textured artwork that depicts a lost world in fascinating detail, from flora and fauna to landscapes and waterways, and his gift as a visual storyteller to project drama, tragedy and triumph across these animals from the Mesozoic.

This collection focuses on Cretaceous Africa, long before the might of Ancient Egypt, where we follow a lone Spinosaurus carving out a living in a richly populated swamp. Not only must he find food to sustain himself, but there are direct threats to himself from other hungry predators and giant herbivores too. You can almost imagine the David Attenborough narration overlaid on the daily rhythms of survival as herbivores cross paths with carnivores who in turn cross paths with other carnivores who in turn cross paths with other herbivores, all straining to make it through another day, find food and rear their young. The drama comes from the perceived thought processes and responses demonstrated by the dinosaurs reactions to one another, all done without words or captions, drawing you in deeper as you project motives and reasons onto the protagonists, as if they’re street gangs in some run-down urban environment.

Anyone who enjoys a wildlife documentary will get something beneficial from this, but anyone who likes dinosaurs can only feel elation at such a beautifully crafted and well executed work.

And if you like that: Check out Ricardo Delgado’s other brilliant and captivating books