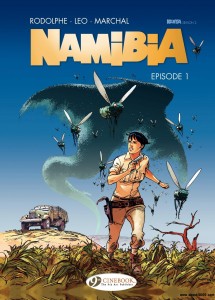 Linking directly to the previous five-volume series Kenya, British agent Kathy Austin is recalled to Africa to investigate another strange scenario on the continent. This time it’s not about isolated creatures from prehistory, but over-sized insects, damaged crops, a prematurely aging population and someone who appears to be Reichsmarschall Hermann Göring. Unlike Kenya, Namibia appears to be a less forgiving place in 1949, and that’s not helped by some of the attitudes towards race and women that some of the people express. So with a reluctant and disgruntled Major Bowley and a somewhat mysterious UN official called McDonald whose father is Namibian, they set off to find some answers.

Kathy Austin’s character shows more confidence this time around, which is just as well considering the thoughts and actions displayed against non-whites and women. The book doesn’t shy away from this, and takes advantage of the fact that Namibia was forcibly taken away as a colony from Germany at the conclusion of WWII. Like with Kenya, and indeed Leo’s Aldebaran series, the encounters with creatures are fleeting and mysterious, and I soundly approve of this new direction (although more prehistoric creatures wouldn’t have gone amiss either).

Bertrand Marchal has joined the creative team for this series, taking over the drawing from Leo, although Leo still prepares the layouts. Much credit needs to be given to Marchal as his style perfectly matches Leo’s, to the point that if you weren’t aware you’d probably never guess.

As before, this is excellent sci-fi that’s daring to be different from the mainstream. A genuinely intriguing and involving tale.

And if you liked that: Just about anything by Leo comes highly recommended

Hugh’s in The Beano
Age Of Reptiles: Ancient Egyptians