By Rodolphe and Leo 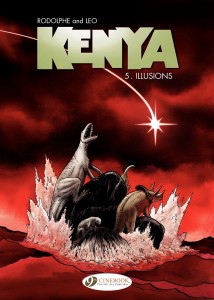 This concluding part to the Kenya story offers an explanation of the surreal events out in Africa, although it doesn’t quite answer all of the questions, plus it also sees the surprising demise of one of the leading characters following a redeeming act. Beyond that, saying much more would spoil what’s in store for you, suffice to say that there’s plenty of period action, prehistoric beasties and sci-fi intrigue, not least our awakening to the phenomena that is the UFO (which here, at least, is something tangible).

It should be pointed out that Leo and Rodolphe share scripting duties, with Rodolphe then writing the dialogue and Leo producing the art. It’s possibly because of Leo’s involvement at the scripting stage that this feels like a welcome companion piece to the Aldebaran series despite not being directly linked through the story. It’s a tale of scientific mystery, our place in a wider universe, and how we conduct ourselves with one another, with the prehistoric (and bizarre) creatures being the cherry on the cake. Personally I’d have been quite happy for this to have been fleshed out further, but that doesn’t mean you’ll be feeling short-changed – just sad to see it go.

And if you liked that: There’s a sequel, entitled Namibia, which fingers crossed Cinebook will share with us in the near future