You are here: Home › Bunny vs Monkey Book Two
By Simon Chadwick on August 7, 2015 in Reviews 0 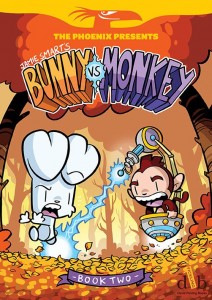 Part of The Phoenix’s success is its blend of stories, from action and adventure through to historical comedy and onto the complete unruly mayhem that is Bunny vs Monkey. Jamie Smart somehow encapsulates everything that is daft and wonderful about the kids’ comics we used to know and rather than regurgitate it as a facsimile has instead channeled the spirit into a bunch of woodland animals (please note, some of which aren’t typically found in a wood).

On one hand it has the chucklesome comedy of strips you’d had have once read in the likes of the Beano or Whizzer & Chips, and on the other it has an egotistical megalomaniac hellbent on world domination (or at least the woods) and a partner in crime capable of building the most despicable and destructive devices yet devised by man or skunk, so all of that straight out of an adventure comic or superhero story. Each brief four to six page story smashes the two together, all dressed up in the rather cute and utterly disarming rendering of the animals. The result is robotic worms, a Trojan Moose with bum rockets, and a giant robotic octopus called Octo-Blivion, not to mention lasers, explosions and jelly.

It’s all incredibly silly, quick-fire and funny, largely because Jamie Smart understands the limitations of his brief few pages and plays to those strengths, not aiming for an overarching narrative but just having fun week-to-week with it. You can see why kids love it.

And if you liked that: Plenty more fabulous books for kids in the shop at www.thephoenixcomic.co.uk