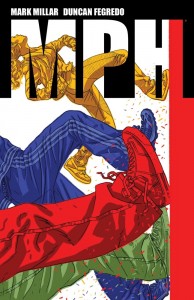 Mark Millar continues to beat his own path in comicdom by exploring the genre’s tropes and wider conventions with a contemporary eye. By not having to conform to decades of back story he enjoys taking something we think we know well and creating something altogether fresh with it. His knack is keeping it relevant, upbeat and tight, and he’s not afraid to throw in a twist just when we think we know what’s coming next because of our countless exposures to the more traditional fair.

In MPH he’s playing with superhero speedsters, except in this book they’re very much not the costumed kind. MPH here is a bottle of pills, a street drug, that gives the taker extraordinary speed, so when said bottle falls into the hands of a Detroit youth, Roscoe, living on the periphery of the law a whole host of opportunities open up before him, and his friends that he shares the finite supply of pills with. Before long they’re seeing the country from end to end, taking selfies whilst riding on racing cars and helping themselves to pretty much whatever they choose. But the harsh realities soon begin to play on Roscoe’s mind, so when he decides they need to alter their ways not all of his group see it the same way he does. It’s not easy to go from nothing to everything to nothing again.

And there’s something else going on here, an individual held in a secure Government facility that displayed similar abilities years before. The Government want to put a stop to the speeding gang but need help to do so, so turn to the mystery man for help, and his involvement helps fill in the gaps as to the history of MPH and its affect.

Millar likes to team up with exceptional artists for his Millarworld projects and Duncan Fegredo is no exception. His effortlessly detailed style fits the tone of the book perfectly. The end product is about as far away from the Flash or Marvel’s Quicksilver as you could hope to get, which is sort of the point, as it weighs consequences, obligations and regrets against the freedom of doing and living as you please. Race out and get a copy.

And if you liked that: Fegredo’s recent work on Hellboy is well worth a look at to