You are here: Home › Reviews › Shaolin Cowboy: Shemp Buffet
By Simon Chadwick on June 23, 2015 in Reviews 0 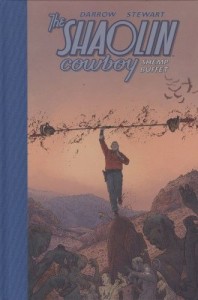 Following on from the original Shaolin Cowboy run that was cut-off in its prime, Geof Darrow’s found a new home for his hero at Dark Horse. This new tale does follow on from the original series, but you don’t need to have read it, plus it appears to skip an almighty swathe of the action to bring us to a point in time that Darrow can have some particular fun with. Because, let’s be fair, throughout a little over 130 pages, this is pretty much one incredibly drawn, immensely detailed, and superbly coloured fight with zombies. What it lacks in dialogue it more than makes up with insanely detailed depictions of zombie mutilation, dismemberment and destruction. And not a lot else.

Now that may sound like a rum way to spend your hard-earned money but this is the closest comics get to high definition, and Darrow is such an utter craftsman when it comes to fabulous linework that page after page after page has you absorbing the detail. There is precious little blank space so that even the naked degenerating cadavers of the undead are adorned with countless tattoos and crawling beetles. Not so much a book you read as one you look at, presented like a coffee-table compendium on carcass combat. Brilliantly executed.

And if you liked that: Just Google Geof Darrow and take your pic. It’s all good.