Jeff Hawke was a British science fiction comic strip created by Sydney Jordan and ran in the Daily Express from 1955 to 1974.  Despite it’s obscurity in English-speaking countries, it is often regarded as one of the most important science fiction comics ever released. Cartoonists’ Club member William Rudling tells us how you can find out more about Jeff.

The Jeff Hawke club was formed in 2001 with the aim of bringing the Jeff Hawke science-fiction stories to a wider public. The club is a unique and very successful publishing venture,  re-printing for the first time ever  the entire run of Jeff Hawke stories , probably the greatest sci-fi comic  strip of the 20th century. Created and drawn by Sydney  Jordan, Jeff Hawke ran consecutively as a syndicated strip in two British newspapers from 1954 until 1988  and was a sci-fi strip aimed at an adult audience. Its themes are subtle and thought provoking  – its artwork mature and realistic. The entire corpus comprises 111 stories  and until the JHC began its work only six of these  were available in reprinted form in English. 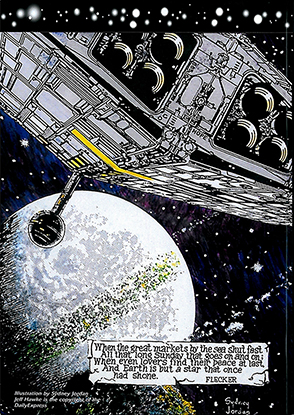 To date, since its formation , the club , with the full co-operation and encouragement of Sydney Jordan , has  re-published  93 of the stories in a series of large format books, which reproduce the strips ( from originals in the newspaper archives)  at their original size. Accompanying each story are extensive notes, both by Sydney , and by well known  science author  and collaborator Duncan Lunan.

These books are published three times a year and are exclusively available to members of the Jeff Hawke club. The membership fee is  paid annually and for this you will receive the next three books as they become available. Membership also allows you  to purchase all the other books in the series and thus to obtain the entire collection of Jeff Hawke stories to date.  This is a unique opportunity to  own and read  this groundbreaking sci-fi series available nowhere else.

The Jeff Hawke Club will also be at The Lakes International Comic Art Festival this October.