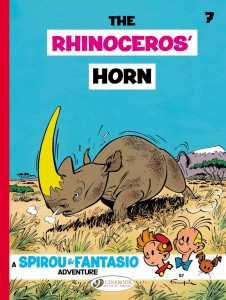 An early tale, this one, but a good one (as you’d expect from Franquin). Spirou and Fantasio get caught up in some industrial espionage when they rescue a man in possession of plans for a revolutionary new car. The other half of the plans are held by his colleague, now on the run as he attempts to stay one step ahead of the gangsters who have already torched their factory, so it becomes a desperate race to beat the baddies to this mystery man. Along the way the duo bump into an enthusiastic rival reporter who’s keen to team up (although Spirou’s not that pleased at the prospect) and end up delving deep into Africa, all the time dogged by the bad guys.

It’s an adventure that trips along at a merry pace, brandishing its wit and drama confidently throughout, and all joyfully illustrated by Franquin’s pen. I’m increasingly impressed by his work and it’s a crying shame so little of it is available in English, so a pat on the back to Cinebook for putting another of his books out.

Ideal for all ages – you won’t be disappointed.

And if you liked that: Volume 8 out soon