You are here: Home › Reviews › The Hartlepool Monkey
By Simon Chadwick on March 15, 2015 in Reviews 0 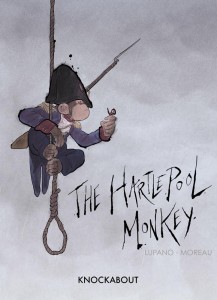 You may already be aware of this little bit of English folklore, although folklore may be the wrong word. In 1814, while Britain was at war with Napoleon’s Empire, a French warship hit trouble off of the Durham coast and sank during a storm. Amongst the detritus washed up upon the beach at Hartlepool the next morning was a monkey (portrayed in this telling as a chimpanzee, so an ape, but we’ll let that one go) and because the inhabitants of Hartlepool had never seen a Frenchman before they assumed that this must be what a Frenchman looked like, so they locked it up, put it on trial, and subsequently hanged it.

Lupano and Moreau have taken this xenophobic tale and enriched it with a cast of characters from the village that get entwined with the monkey’s fate, from an invalided ex-soldier to the feral children of the village’s mayor, they flesh out a story of stupidity infused jingoism that is just as relevant in these days of UKIP.

It’s witty, it’s tragic, and it may also be true, and its ramifications echo down the decades and resonate throughout the town today. A great little graphic novel.

And if you liked that: You can see more of Knockabout’s fine output at www.knockabout.com