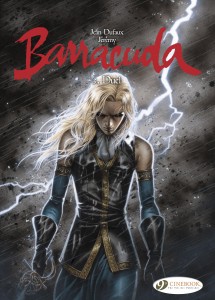 Barracuda is a curious combination of outright clichés (skull shaped mountain on island) and daring invention (Emilio’s transvestitism and his  struggle to avenge his lover) making for a series that leaves you scratching your head at times but keeps you engaged all the same.

With Captain Flynn effectively murdered during his duel with Morkam, Emilio wants revenge, but he’s not greatly skilled as a swordsman and knows it, so seeks out assistance in gaining an advantage. Meanwhile Maria is drawing out her revenge on the slave-trader Ferrango by manipulation of him as her husband, but her domination of him is threatened when her affair with Raffy is exposed.

Out at sea, De La Loya is hunting the Kashar diamond on behalf of the Spanish crown, attempting to track down the Barracuda and its captain Blackdog (Raffy’s father). De La Loya has found a crew member from the stricken vessel on an island refuge for lepers who reveals the desperation back on board his former ship where a stand off has taken place between If-No the witch and Blackdog at the expense of the rest of the crew. We also get to visit upon Blackdog’s misery, encountering his delusional state and perhaps affirming the curse that the diamond is said to have.

Jérémy’s art grows stronger with every book in this series, with striking character designs, depictions of island life and some glorious colour. It looks as if, story-wise, events may well be coming to a head, so I’m intrigued as to whether or not Dufaux can pull it all together in the next volume.

And if you liked that: For more swashbuckling action pick up the magnificent Long John Silver, also from Cinebook