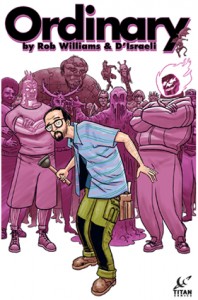 Michael Fisher is an ordinary bloke, altogether rather unremarkable and, if truth be told, a bit of a loser. There’s nothing special about Michael. Then one morning, for no apparent reason, the population of the world suddenly start to display superpowers in a dizzying array of varieties and combinations – all, that is, except for Michael.

Following an initial, but somewhat short-lived, panic as people adjust to their new circumstances, Michael learns from the TV news of a fire on Manhattan near his son’s school. Fearing his ex-wife won’t be in a position to get there, and because the world appears to have taken leave of its senses, Michael decides to do the right thing and sets out to find Josh. Of course, now the people of the world have superpowers, they’re all getting to grips with where they are in the pecking order, settling grudges or generally bumbling around, so even a relatively short journey is going to be awkward for a man who is, well, ordinary.

British writer Rob Williams has concocted a brilliant take on the superhero genre that’s both darkly funny and gently touching. From newsreaders with super-shiny teeth to a hobo with the ability to turn people’s anger and guilt into visions that lead to their destruction, when everybody’s got powers those abilities are going to reach from the downright dangerous to the extremely absurd, and Williams wrings a lot of humour and pathos from it.

D’Israeli, one of my favourite comic artists, is not your typical superhero illustrator, so his take on the genre feels more realistic, more likely, should something as absurd as these events occur. His portrayal of Michael as a shambling, no-hoper, without a hint of chiselled good looks or a six-pack, makes him an instant everyman, and identifiable. I suppose what I’m trying to say is that it makes him more ordinary.

Ordinary is British comics at its best.

And if you liked that: For more D’Israeli delights check out Scarlet Traces (it’s great)