You are here: Home › Czechoslovakia 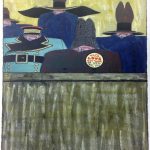 Fifty years since the 1968 Soviet invasion of Czechoslovakia quashed the Prague Spring, a new exhibition called ‘MAKE LOVE NOT WAR OR WE’LL KILL YOU’ at Czech Centre London looks at how thirteen cartoonists in the Czech and British press interpreted the politics of the time through satire in over forty political cartoons. The dramatic events […]