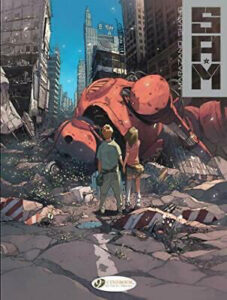 This concluding volume to the series sees the teens taking their fight directly to the machines. Encouraged by Ian’s escape, he leads the group deep into the bowels of the earth to where the robots have seemingly commandeered some sort of government or military facility. All of them are resigned to the fact that this is a suicide mission. They aim to inflict as much damage as possible, and expect to die in the process. Their only advantages are Ian’s prior knowledge of the place, and SAM. But there’s only so much they can anticipate. It doesn’t take long for their plans to be swiftly skewed.

What we learn, as the reader, is the reason the world has fallen to the machines. Naturally, it’s humans displaying arrogance and hubris that trigger the event. But it also presents a way that might put things right. It’s just unlikely that the children will survive long enough to see it happen.

Interestingly, the teens’ descent into darkness is handled with thoughtfulness. Devoid of the usual trappings of gung-ho, kick-ass stereotypes, the group is presented in a far more recognisable light. Resigned to their fate, frightened but determined, with nothing to lose. And there are some grisly bits in here too, not least the pit of human remains, but rather than going all-in on gore and sensationalism it’s instead left to our imaginations.

The series has been an interesting blend of the Iron Giant, Terminator, and the Matrix, but at no point has it really felt like a copy of any of those tales. The artwork, depicting the heart of a ruined city, has felt fresh despite the bleakness it depicts. Meanwhile, the children’s attempts to survive, feasting on lichen soup whilst living in hiding, has come across as a genuine struggle. While many stories crystallise around a central, often macho, protagonist, focused on fighting the fight and saving the day, the series has come across as a more honest reaction to this dangerous future. Consequently, it’s a story that’s easier to take to heart.

And if you liked that: For robot action for another perspective, check out ABC Warriors

Dega
Zookie The Dragon: On Your Marks