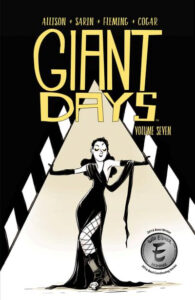 Well, if you must know, they were blooming marvellous. So good, that I really should be shouting about this series. So here goes.

The three stars of the piece, Susan, Daisy and Esther, are now in their second year at Sheffield University. That means they’re out of halls of residence and into a rental. But the gradual shift into adult responsibilities is greatly marred by the social, emotional and economic realities that constantly slap them in the face. Esther’s blagged a part-time job in a comic shop and is loving it, Daisy’s got a girlfriend who seems to have all but moved in, and Susan’s up to something she doesn’t want to share with her housemates. And not much coursework ever seems to get done.

That’s the bare bones of it, but what infuses this series with its magic isn’t so much the plot, but the characters that inhabit it. They genuinely could be doing anything at all – tiling, washing up, re-arranging a sock drawer – and it would be riveting stuff. And that’s all down to John Allinson and Max Sarin. Sarin is such a striking cartoonist that every panel is a joy to behold. He is a master of non-verbal communication, seemingly incapable of drawing a dull pose or a repetitive expression. This means that each and every scene is positively thrumming with personality and you are never, ever in any doubt as to how a character is feeling. It also means that any given situation is milked for all its worth giving you your full money’s worth. But that’s just the half of it. John Allinson has no equal for witty, funny, sharp dialogue, producing zinger after zinger as his characters argue, console or generally bat about the banter. Coupled with Sarin’s illustrations there’s just nothing that can touch it.

The supporting cast is well crafted, the situations full of comedy, and, somehow, it never seems to repeat itself. We get to meet Susan’s family in this book, and find out a little more about what’s shaped her personality. Allinson could have written something much easier (fewer sisters for a start) but that would have denied us a brilliant set piece in the Ptolemy home at Christmas. You don’t lose track of who is who, and it delivers an emotional punch too. Brilliant.

If you think comics are just for capes and cowls then this is the series to change your mind. Don’t start with this one – go to book one (pre-Sarin too), but rest assured that when you get this far in you’ll be holding solid-gold.

And if you liked that: Plenty more volumes to look forward to, too!