By Allison, Treiman and Cogar 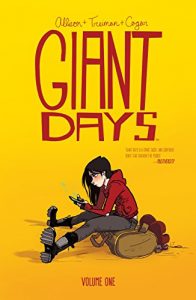 Giant Days doesn’t attempt to recreate the characters and scenarios of Bad Machinery but it does thrum with the same vibrant dialogue and refreshingly real characters. Allison has a gift with the written word, witty repartee and zingy one-liners, not to mention a sarcasm valve that regularly gets stuck open. Giant Days follows three girls who have recently started university and are getting into the swing of student life. That means taking responsibility for themselves, exploring their sexuality, and discovering who they are. There’s very little time for actual study but plenty of opportunity to discuss the world around them.

Esther is pale, unintentionally funny and some sort of emo-goth, Daisy has too much hair and a child-like innocence and Susan is a teenaged frumpster who begrudges any effort to feminise her. Together they have to deal with chauvinistic idiots, a flu outbreak and a bit of experimentation. It rarely goes well. It would be an interesting read for the topics it covers in most circumstances but, under Allison’s hand, it becomes alive with sparkling conversation and buzzing exchanges.

When Esther challenges a girl who she feels has wronged Daisy the default conclusion by any other writer would be a chewing out followed by an apology. Instead, it is Esther who is put in her place and concedes she may be wrong. The genius of this altercation is that although people are hurt in such situations there are many shades of grey between right and wrong. Becoming an adult means the gradual dawning that this is the way of the world rather than childhood views of things being either black or white. This one exchange said more to me about being a teenager than many other books I’ve read that covered the topic.

And it’s funny too. Not always belly-achers, but wry observations and captured moments that encapsulate a time in our lives when the possibilities are endless.

Bad Machinery is not only written by Allison but drawn by him too, so I was curious how another artist would tackle his characters in another book. Lissa Treiman does it proud by delivering distinct, interesting and expressive individuals pulsing with personality. An extremely good choice of collaborator. Treiman’s background is at Disney and that attention to body language and facial expression sells you on each and every scene.

So that’s a solid thumbs up for Giant Days. It’s flippin’ marvellous, and I defy you not to enjoy it.

And if you liked that: Buy a Bad Machinery collection. Do it now!