You are here: Home › Valerian: Shingouzlooz Inc
By Simon Chadwick on February 14, 2020 in Reviews 0 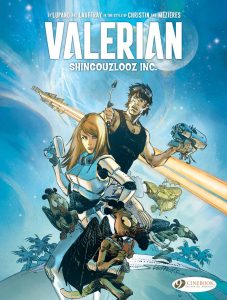 There’s an obvious conundrum presented when creators end their involvement in a project, either by someone’s choice or the via the difficult-to-negotiate-around issue of dying. The current Asterix books are a good example of this. They’re in the spirit of the old tales, but the latter of those were themselves in the spirit of Goscinny’s books, so the current creations are falling rather short. There’s clearly still a market for them, so the commercial mind can over-ride other factors. You could point to Star Wars as another example here. To paraphrase Dr Ian Malcom, they were so preoccupied with whether or not they could, they didn’t stop to think if they should.

So what’s the answer? For me the answer is to attempt a different direction rather than more of the same. Rogue One, for all its production troubles, is a good example of this, as is the Fargo TV series. And when it comes to comics, Valerian: Shingouzlooz Inc is another.

Christin and Mézières’ series is much beloved, and in part that is down to the cyclical nature of the story arc. Trying to tag an additional story onto the end of that is problematic and almost definitely self-defeating. But creating a story that fits within that arc, and that respects and acknowledges the original work without attempting to redefine it, is surely the way to go.

Wilfred Lupano was given the task to tread in those mighty footsteps and he has cleverly created a self-contained story that manages to extol all the exuberance of the original series and avoid the pitfalls of presenting something flimsy and forgettable. In fact, the stakes don’t get much higher. It’s never a question of how will he make this fit with the original books, but instead it’s about how the characters will rectify a seemingly impossible problem and so not affect the original tale. Not a Whodunnit but a Howdoit.

The story tackles the very current problem of big business and wealthy individuals hiding their wealth and what they own in secretive off-shore accounts, but in this instance it’s taken to two very startling extremes, one of which involves all life on Earth. As the story progresses Valerian and Laureline’s efforts to undo the mess are constantly undermined and further complicated to generate a deliciously relishing farce.

Mathieu Lauffray’s artwork is the final polish, reminding me often of Cam Kennedy. He’s not attempting to mimic Christin’s very personal and distinct illustrative style, but he still embodies the page with an appeal that is distinctly Valerian.

Picking the right creators and trusting them to deliver has paid dividends here, so if you’re a fan of Valerian and Laureline you’ll most certainly be wanting to add this to your collection.

And If You Liked That: Pick up Long John Silver, also from Cinebook. It’s great!

The Wolf Of Baghdad
Lodger