You are here: Home › Billionaires: The Lives Of The Rich & Powerful
By Simon Chadwick on January 6, 2020 in Reviews 0 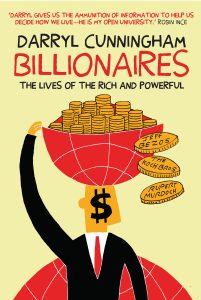 With Christmas but a memory, how many of you have purchased a gift from Amazon? The retail behemoth’s meteoric rise is one of three tales told in Billionaires, a brilliant book by Darryl Cunningham. It explores the ruthless practices that have lifted four individuals to billionaire status.

Firstly, Cunningham looks at Rupert Murdoch, his not so humble beginnings and his initial left-leanings before hitting upon a populist route that he grabbed with both hands. Much of it is already well documented, but it’s the single-minded determination of the man, willing to do whatever needs to be done at any stage, that is most revealing.

Secondly, there are the Koch brothers. Two men who took their father’s business to unparalleled new heights and paved the way for the American politics we see today. When you’ve money beyond counting it’s much easier to use that money to try to shape a world that benefits you (and your money), but there can be unforeseen consequences to that, and in this case his name is Trump.

Then, finally, there’s Jeff Bezos. Like Murdoch he saw an opportunity and exploited it, but perhaps unlike Murdoch, he’s far from finished in his ambitions. There’ll be some that will see Bezos’s ambition as an applaudable strength, but you may not feel that way if you’re a worker or supplier.

What unites all the tales are the four men’s willingness to take full advantage of anyone and anything that crosses their path. Their justification is that if they don’t, someone else will. Consequently, they act in a manner the average person would find reprehensible. But we don’t deal with the men, we deal with the shiny, glossy companies they own, so it’s all too easy to overlook their methods. Eye-widening reading.

And if you liked that: Put Cunningham’s Supercrash on your reading list.