You are here: Home › Reviews › Corto Maltese: The Early Years
By Simon Chadwick on November 11, 2019 in Reviews 0 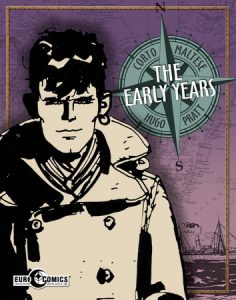 These Corto Maltese collections have been wonderfully presented and, thankfully, reproduced at the correct size. At first glance the publisher made the odd decision to start with book 3, Under The Sign Of Capricorn and is only now, years later, returning to book 1. There seem to be two reasons for this. Firstly, another publisher had already printed volume 2, The Ballad Of The Salty Sea. This was some years before, so anyone who had already bought that was unlikely to dip their hand into their pocket again. But secondly, The Early Years really doesn’t feature much Corto Maltese. It instead focuses primarily on the recurring character of Rasputin. It’s logical, but could indeed confuse some.

The Early Years is set at the end of 1905, during the end of Russian and Japanese war. Rasputin is a deserter from his Siberian regiment and is trying to outwit both his countrymen and the Japanese still willing to take a prisoner (or worse). Jack London, the author, is a war correspondent who ends up introducing Rasputin to Corto Maltese. Corto is then just 18 years of age, and although it’s a strange friendship it is one that endures in its own way throughout the rest of the books.

It’s a very short story and pages have been discovered (in reality, they are newspaper strips and are included here at the back of the book) of a continuation where Pratt intended to send Corto and Rasputin in search of King Solomon’s Mines. Alas, they were never completed.

The fluidity and looseness of the Corto Maltese stories, coupled with their daring flirtations with history and period travel make the books a genuine eye-opener, and The Early Years is no exception. You won’t read anything else quite like it.

And if you liked that: All volumes are still available.